To provide the experience of a lifetime to its guests, with consistently excellent service, and first-class boats, fishing gear and snorkeling equipment.

Our most valuable asset is our first-rate staff and crew who take pleasure in giving our guests the best possible experience while they are on our island.

Why we do this

Our company was established in Grand Cayman in 1951 by Capt. Marvin Ebanks, who is the 'granddaddy' and founder of snorkel trips to the Stingray City sandbar. Capt. Marvin remembers as a boy fishing with his father and stopping by a shallow area in the North Sound to clean their catch. They and the other fishermen noticed that stingrays would congregate and eat the fish scraps that were being thrown into the water.

Some years later, when Capt. Marvin returned to the island after serving in the Merchant Marine, he decided that tourists to the island might like to see the stingrays from a boat, so in 1951 he began with a borrowed sailboat, taking people out from a dock in West Bay to see the stingrays. In those days masks and snorkels hadn't yet been invented for widespread commercial use, but the locals used five-sided wooden boxes (called 'water glasses'), with the fifth side being glass, to look into the water to find conch and see the fish and coral.

Once masks and snorkels were in common use, Capt. Marvin took people out to the clear, warm waters of the North Sound to snorkel, pick up some conch, see the stingrays (still from the boat), and his crew would use spearguns to catch fish and lobster. The lunch break was on the beach near Rum Point, and the fresh catch was cleaned and steamed Cayman-style over a wood fire. The conch, meanwhile, was cleaned and marinated with Capt. Marvin's special marinade and served on soda crackers as an appetizer while the fish was steaming. Ms. Anna, Capt. Marvin's wife, would have cooked a big pot of rice and peeled and cooked potatoes in the morning for their famous potato salad as well, to bring along on the boat and serve with the fish lunch.

The trip used to last all day, from about 9 AM until about 5 PM, and those trips are what the old-timers remember that started all the interest in the stingrays, snorkeling and coral in the North Sound. Today the area is world-famous and several generations of stingrays later, they are still living in the wild and coming up to people for their snacks.

September 2011 marked Capt. Marvin's 95th birthday, and the 60th year of operation for us. Since September 2000 we have moved to the second generation of ownership with his son and his nephew. Capt. Marvin's continues to provide the experience of a lifetime to its guests, with consistently excellent service, and first-class boats, fishing gear and snorkeling equipment. Our most valuable asset is our first-rate staff and crew who take pleasure in giving our guests the best possible experience while they are on our island. Come on aboard!

Captain Marvin's proudly offers one of the best fleets in the Cayman Islands. We offer first-class cabin cruisers and motor catamarans for your comfort. We provide the best boats, fishing gear, and snorkeling equipment for snorkel tours and fishing charters. Our local guides are experts in the area around Grand Cayman. You'll see the famous sites, plus a few hidden gems.

Our first-class boats, fishing gear and snorkeling equipment are all top-of-the line and kept in excellent condition to ensure a fantastic trip! Your safety is our highest priority and we take great pride in ensuring your comfort with professional equipment and well maintained boats at all times.

We have a team of experienced captains and crew that are ready to show you the best sights on the island! They are all knowledgeable, friendly, and very accommodating. They ensure that our guests have an unforgettable experience while they are on the island.

#1 Watersports in Grand Cayman and Hall of Fame on TripAdvisor

Top rated watersports in Grand Cayman and also highly recommended by our customers. We have been operating for over 70 years so you can be sure that we are well-established and experienced enough to provide you with the best service.

A slice of paradise Grand Cayman

Grand Cayman is one of the most beautiful islands and one of the most diverse ecosystems in the Caribbean. It’s also home to Stingray City, which is exactly what it sounds like—a spot where you can swim with stingrays. A few things that we love about Grand Cayman include: 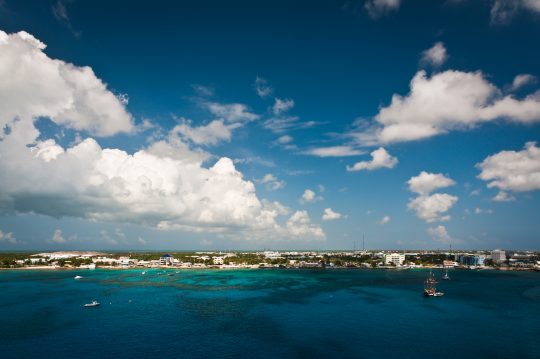 Most frequent questions and answers

What happens if our ship is late or doesn't stop in Grand Cayman due to the weather, etc.? Will we get a refund?

If your ship arrives too late for your tour with us, or is not able to stop at all, you will not be charged. However, in most cases, we will have been made aware in advance that your ship will be arriving late, and we will do our best to make adjustments to the timing so that you can still take your tour with us. Please check in at our office in the Waterfront Centre as soon as you are able to get off the ship to see what we have been able to arrange for you. Because we do not charge you in advance, you will not need a refund if your ship cannot stop or arrives too late for you to take a tour with us. If you have booked through a tour agency and have paid them in advance, you will need to deal with them directly to receive a refund.

Do you have group rates?

Yes, we offer group rates starting with groups of ten or more, giving you 10% off the adult fares. For groups who would like a private charter, we also have a rate sheet that we would be happy to share with you. Just look at the 'Private Charters' section of our web site.

Do you provide snorkel gear?

Yes, we provide snorkel gear (mask, snorkel, fins and snorkel vest or life jacket) for everyone ages 4 and up, included in the price of your tour.

Can we have a private boat?

Yes, we would be happy to make your tour a private charter. Please see the rate sheet under 'Private Charters' on our web site.

Do we have to worry about missing our ship?

We will not schedule you for a trip that will not work with your ship's schedule, and we have kept detailed records over the years so we know what time your ship's last tender will be.

Do you pick up at the port?

We are the only provider with an office right across the street from the cruise terminals, so you are guaranteed to find us easily. Your reservation confirmation from us will give you walking directions to our office, and there is a photo of the building (Waterfront Centre) and a map on our web site.

Can we get dropped off at the beach after our trip?

We would be happy to drop you off at Seven Mile Beach after your tour with us. There are always local buses and taxis waiting at Calico Jack's and Tiki Beach, two of the more popular areas on the beach, both with restaurant/bar/restroom facilities. Bus fare back to the cruise terminal is US$2.50/person, and taxi fare is about US$5-7/person, subject to change.

Are there age restrictions?

We have no age restrictions on our tours. We ask that if you are bringing along children under the age of 4, you bring flotation devices for them as we do not provide them for children under age 4.

Are pregnant women able to take the tour?

However, pregnant women are not allowed to do any of the dolphin tours.

Do I need to know how to swim?

It is recommended that you know how to swim if you intend to do any snorkeling. We have a lifebuoy that you may use to hang on to during the snorkel stops so you can see the fish and coral if you are not comfortable swimming.

How deep is the water?

The water at the Stingray City sandbar is 3-4 feet deep. We anchor the boat nearby in about 5-6 feet of water so we don't run it aground, and you then make your way over to the shallower area where you will stand in the sand while the stingrays swim around you. The snorkel stops are in 8-10 feet of water.

Are there changing rooms at Stingray City?

We recommend that you wear your swimsuit under a cover-up or shorts/t-shirt as the only place to change clothes at Stingray City is in the small head on the boat.

How do we pay?

You may pay in cash (US$ or CI$) or by credit card at check-in; if you book online you will include your credit card information on the reservation and it will be charged when you check in with us on the day of your tour.

Do you offer travel agent discounts?

We offer card-carrying travel agents a discount on our tours. Please let us know when you are making a reservation, and bring your IATA card with you for check-in.

What is the maximum number of people allowed on your tours?

We have several boats ranging from 34-47 feet in length, with capacities from 20-45 people. The average number of people on a tour is 25. Our tour buses (for the Hell/Turtle Farm tour) have a capacity of 22-24 people.

How early can we make a reservation?

Do you offer SCUBA diving?

No, we do not do any SCUBA diving but we recommend DiveTech locally (www.divetech.com).

Do you offer fishing trips that you can pay per person rather than chartering the boat?

No, we do not offer shared fishing charters.

Do you have any recommendations for a family with limited snorkeling experience?

We strongly recommend that you know how to swim before taking a snorkeling trip, but our crew are experienced at teaching beginners how to snorkel. Just ask them when you get to the boat.

Do you pay when you book or when you arrive?

We require a credit card to guarantee your reservation, but it is not charged in advance.

How long is the tour?

Where would we book this excursion?

You may book online by filling out the reservation form on our web site, or you may phone our office using one of the phone numbers on our 'Contact' page.

Is there a better time of day to see the stingrays?

The stingrays are hungry morning, noon and night. The ones who have eaten in the morning will go off to their afternoon hangout, and others will take their place throughout the day.

Is there a season for fishing? What's the best month to catch fish?

Fishing is great in Cayman year-round.

How much time do we get to spend at each stop on the stingray/snorkel tour?

Can we stay on the boat?

Yes, you may stay on the boat at any of the stops.

Do you offer life jackets for kids?

We provide snorkel vests and life jackets for everyone ages 4 and over. If you are bringing children under age 4 with you, please bring a flotation device for them.

How far is the pier from your location?

Can you accommodate a person in a wheelchair?

Yes, on most of our tours we are able to accommodate a person in a wheelchair provided it is collapsible.

Let us take you on a trip of a lifetime!
Book Now